Coming soon: a new web address for this blog!

[[[At the end of November I'll be migrating this blog to a new address, which will be: racemehome.blogspot.com]]]

and there you have it

I'm officially all moved over to racemehome.blogspot.com

Anything else I write will be posted there, not here.


Unless I change my mind. Which isn't likely, but even if I did, this would no longer be the top post on the page, would it? So I guess it doesn't matter too awfully much.

Have a lovely day.
Posted by Bones, aka Archer's Bones at 20:50 No comments:

Email ThisBlogThis!Share to TwitterShare to FacebookShare to Pinterest
Labels: metablogging

It was bound to happen. I've been riding the wave of horseriding-excitement for three months.

Every high has its low. Yesterday, I just wasn't feeling it. Life piled up. I'd had three nearly-sleepless nights in a row, I'd worked almost 30 hours in those three days, it was a particularly stressful work week, I was barely keeping up with my homework (thanks to the gracious acceptance of a late assignment by one of my professors), and I'm low on the cash flow this month. So when my alarm went off yesterday morning, I snoozed it for about 30 minutes. Then I got up and drove my kiddo to school, came back home and went back to bed.

I could have stayed in bed all day, comfortably if not happily.

When I could no longer sleep, I still laid in bed, not feeling like moving despite my plans to ride that morning. Eventually, I realized what was happening. I've been maxed out recently, and depression was sinking in. But I know the signs of anhedonia and I wasn't about to let that cycle get a foothold. I forced myself to get out of bed and go to the barn. To be fair, it was a lot easier to keep going once I started, and I was at least happy to be at the barn once I got there.

I had planned to work with Dash on our walk-trot transitions again, but something was off from the moment I got there.

I assumed it was just me and my depression, so I let the awareness just stay on the back burner, not fully ignoring it, but not paying it any attention, either. Then I went about my routine.

Get the tack out of the shed.
Put a treat in my pocket for later.
Grab Dash's halter and lead rope.

Dash seemed quiet when I led him out of the pasture - this is unusual for him.
He does usually stand quietly while tied, though, and this time he started shaking his head. Up and down, repeatedly. There were flies buzzing around; the day was oddly still for our windy autumn season. I got the fly spray out and gave him a good layer. The head tossing stopped. Well, that's that, I thought.

He didn't toss his head when I went to put the bit in his mouth - that's unusual for him. We usually have at least two head tosses before he takes the bit.

All tacked up, he followed me almost meekly to the arena. Again, uncharacteristic. He's usually excited.

As soon as I turned to close the arena gate behind us, the wind picked up.
The wind always makes Dash antsy, but this time he seemed half asleep.

He dragged his feet and half-stumbled several times in our first five minutes in the arena.
I dismounted, concerned. I led him around to see if he looked lame - he wasn't. He perked up a bit while we walked around, and even head-butted me like normal as he followed along behind me. But he was still oddly quiet.

I led Dash back out of the arena, untacked him, and just walked around the yard with him.

The wind was getting ridiculous at this point. I talked to M about Dash's mood and health; she thinks (and she would know) that he's just out of sorts. There are two new horses at the barn and the weather's been changing rapidly lately (cue gust of wind). There was no sign of poor health, but Dash is a worrier. She always keeps a close eye on him, so I'm not really worried, but I felt bad for the big goof ball. He hadn't even asked for a treat until after his saddle was off. That's usually the first thing he communicates to me when I show up.

The weather got weird, then. It was calm but windy and the birds were going crazy. It felt like a storm, but one never came.

I took today off. I still didn't feel rested when I woke up, and I just felt crappy. I guessed that Dash and I could both use a day off. I'm going tomorrow, though, even if I don't ride. I can't let the depression win.

I've been coasting on the excitement of getting back to horseback riding. Now, I've reached the low point, but that's okay. I know how to climb up out of the valley.

I did something awesome today.

The restaurant was crazy busy yesterday and we ran out of almost everything, so I had a lot of things to make this morning. It's also the end of our week in terms of grocery shopping, so the stocks were low in most categories.

I looked in the fridge this morning to decide what soups to make today and the only veggie we had enough of for a soup were red bell peppers. So I made roasted red bell pepper soup and threw some butternut squash I found in the freezer. (Thanks, Minimalist Baker! You came up in my google search in the wee hours of this morning and saved my day.) For the second soup, I put hard cider in a pot with cheddar cheese, some thyme, a bay leaf infusion, leftover potato leek soup, and an apple I found.

Those were pretty awesome soups, as it turned out, but the really cool thing was this new cake:

I didn't have a lot of time this morning, but I did have a yellow cake mix and some bananas...

Here's what ya do:

If you're at high elevation like I am, you'll probably want to throw another 1/4 C. flour in there too.

Mix for about 2 minutes, medium speed.

*I use the parchment paper method for cakes: cut a round of parchment paper to fit in the bottom of the cake pan, no-stick-spray the bejeebus out of it, and pour the batter in.

I did this one in two 9-inch layers. That gave me a rather squat cake, so if you want a taller cake either increase the recipe or use narrower pans (is 'narrower' the right word? I don't know).

Aaaaand my cakes fell anyway, so I ended up putting a layer of banana slices in the middle of the cake to bolster the middle... which I will be doing from now on because that was AMAZING.

Oh, chocolate sour cream frosting is the bomb on this cake. I put that in the middle. I also used up the last of my chocolate cream cheese frosting doing the outside and top of the cake. Because yum. 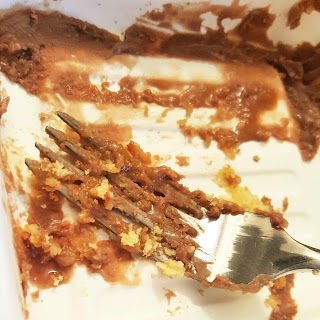 Posted by Bones, aka Archer's Bones at 21:57 No comments:

After years out of the saddle, I went to meet a potential riding instructor. By the third lesson I was leasing a former racehorse. By the fifth lesson I was fantasizing about buying him... that's still a fantasy, but isn't he pretty?

So I'm learning to ride this horse and might even give barrel racing a try. I'm also learning to cook, working toward a master's in history and psychology, and running an apothecary. And I have a kid. Luckily, I also have a pretty awesome husband.
You'll hear about all of that on this blog.

You'll also hear about what it's like being a queer veteran and a rape survivor.
So there's that.

Cool! You can follow along with some of my other endeavors, too: 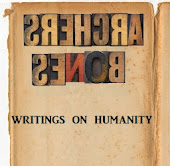